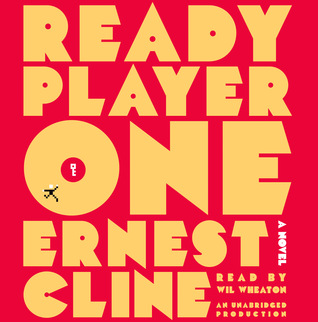 Ready Player One by Ernest Cline
My rating: 2 of 5 stars

I'm a geek, so this geek homage was on my list for a while, sitting on the back-burner; nothing like a Spielberg-created film adaptation to bring a book to the top of your pile!

For the most part, I enjoyed the book - it is action-packed, pacey, and has several geeky references to tickle a fan's interest. To top it all, I listened to the audiobook by geek hero Wil Wheaton, so the entire package should have been perfect. It isn't.

I didn't hate the book as much as many others, but the glaring issues with it are troubling. For one, the first part of the book reads far too much like a gaming manual, as the author elaborates every tiny detail about the world, the characters and the OASIS. It makes for poor writing and an even poorer reading experience. Cline also trudges through most of the same references over and over again, unveiling the hypocrisy of his varied geek interests. He's stuck in 80s nostalgia, and 80s sensibilities as well.

The tasks the characters must complete to reach the Golden Easter Egg are at two ends of the spectrum - fascinating and skill-based (jousting), and utterly ridiculous (re-enacting a Monty Python film). Much of what protagonist Wade has to go through is based on luck, which enables him to be written as vainglorious and pompous. His enlarged ego is down to him being an author stand-in rather than someone of higher intelligence or wit. He is, however, a product of the author's sensibilities; a quintessential 80s hero. Wade is an average guy, hard-done-by by this world, but superior for plot reasons, which is why he wins and saves the world. If there's one thing Wade knows, it's James Halliday and Halliday's geek love. Wade hasn't got a single original interest, everything he loves and enjoys is from Halliday's Almanac. While the reader may guffaw at such a plebeian character, the author raises him to whole new pedestal. Cline takes his character far more seriously than he should, as does he take his narrow view of geek culture.

The book includes token characters to support our protagonist's journey - the friendly sidekick H, the Asians (because the West loves Asian culture but not Asian people) and the love interest. One positive of the book is that Art3mis, as a character and an avatar is written as short and fat. Because this book is all tell and no show, we are specifically told this, but never does Wade or the author fatshame her. The bar is set so low on our expectations that it is novel to read a fat character being considered attractive despite her body size. The only problem is that there is very little else to Art3mis - she is introduced as super-powerful and super-intelligent, but the moment she steps into Wade's life she becomes a love interest, her arc overshadowed by his journey. Also, the author introduces a really contrived chink in her armour, one that we would never see in any male characterisation. It is so frustrating to see so much potential drowned by male privilege and gaze.

The resident Japanese characters are there for little else than filling in the gaps of the diversity wallpaper. All other characters are written as straight, white male characters. The majority of the geek culture referenced is also male, white and American led, with some Japanese anime and manga thrown in for good measure.

I am not sure what kind of film this is going to make, but since the book is hardly deep, yet quite visual, it won't be hard. What bothers me is that Hollywood has taken it upon itself to erase fat characters. The one positive of the book - a fat love interest - has gone the way of the dinosaurs in the film, and I think this is the greatest travesty of all. If you're going to adapt a problematic book for wide consumption, you better do right by its very basic representation.

It is easy to get caught up in the action and plot of this work, but this book touches little more than the superficial idea of geek culture.