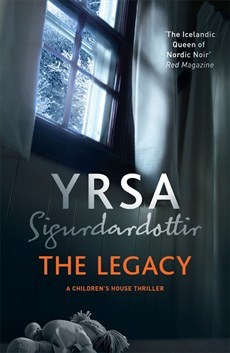 The Legacy by Yrsa Sigurðardóttir
My rating: 4 of 5 stars

This book was recommended to me by my sister. I love crime thrillers, but haven't picked up many of them recently. Yrsa Sigurðardóttir is a noted Icelandic thriller writer, and my sister loves her work. This was the first book of hers that I've read, and whoa, it is quite a doozy.

The prologue implies a heinous crime committed, resulting in three young children being orphaned. We are keen to find out what happens to them, but do not get the chance as we are quickly swept into the terrifying first chapter where we witness a break-in at the house of Elisa. Details of what happened that night are eked out through conversations and investigations, headed by Huldar - new to being a detective and leading a case on his own. The horrors of what happened are witnessed by Elisa's daughter, who is entrusted to psychologist Freya, a capable woman struggling with her own personal upheavals. And, in amongst all this is amateur radio enthusiast Karl, who seems to have picked up a mysterious station broadcasting some numbers, but is this connected to what happened to Elisa?

We learn plenty about all the characters in the book - and there are many - but all along the events of the prologue keep nagging at us, providing a zeigarnik effect that isn't resolved till the very end. Yrsa is superb at leading on her readers with nuggets of information that could be interpreted in different ways, depending on who you want the culprit to be. There's a smattering of backstory provided for virtually every character thereby suggesting they are in the clear, but are they?

As complex as the plot may seem, especially given the detailed explanations of working the radios and channels, plus the plausible psychological treatment of the young child, the book moves at a rapid pace, never slowing down or becoming bogged down by its thoroughness. You are immersed in this world and feel attached to the characters, good, bad or ugly.

There are moments of sheer frustration when you wish a character would retort or fight back, only to realise you would behave no differently given a similar circumstance. Freya is put upon by her seniors, but can hardly fight back; Huldar is a veritable scapegoat, bombarded by office politics and policies placed on him by an incompetent boss. It's tangibly realistic, and that is what keeps a reader hooked. That and the case, of course. You know that all the details in front of you are definitely leading somewhere and you keep joining the dots to figure out the shape - only, it keeps coming out wrong because Yrsa has a googly ready to bowl at you just when you think you're too clever for her.

I loved this whodunnit. I tried to guess the culprit and the characters who could possibly have been the children in the prologue, only to be surprised in the end. Scary good, this book. Spine-chilling descriptions and a convoluted but easy-to-follow plot makes this an excellent entry in the crime thriller genre. I would say the spotty translation was its only failing - overall a fantastic read that you will enjoy racing through.